This is the second article in a series of three that attempts to answer why companies are reluctant to invest in workflow automation software. In the first article, we dispelled five myths. We will focus on data in this article.

According to the Idealliance "2017 Capital Investment Study," there is data that the lack of productivity in the printing industry may soon change. As we reported in an earlier blog, the study found that the three top investments reported by printing companies are operational:

Where is this surge in investments?

The problem is that we have not seen this flurry of investments yet and we are not alone. Pat McGrew, the Production Workflow Service Director at KeyPoint Intelligence | InfoTrends acknowledged this reluctance at a recent webinar1, stating, "American printers say that investing in automation is hard for them. They feel that they have too many pieces of software working in different departments that don't talk to each other. They are thinking 'Why invest in more software that is unlikely to integrate?'"

We hear the same thing and agree. In an article that will appear later this year in In-Plant Graphics and Printing Impressions, we discuss the issues in today's workflow such as:

Does that mean that companies are reluctant to invest in workflow automation because it's not perfect? Not according to the latest market research. In the above referenced XPLOR webinar, McGrew showed this slide with data from the U.S. Production Software Investment Outlook, (InfoTrends 2016) which asked people who were not investing in workflow automation why they were reluctant:

According to this, about 90% felt that it was one of the top four reasons listed: can't cost justify the investment, unconvinced of the benefits, lacking IT or operational skills, or unfamiliar with the benefits. We have a different interpretation; in our opinion, there are not four reasons but two reasons.

We believe that three of those answers–can't cost justify the investment, unconvinced of the benefits, and unfamiliar with the benefits–are all the same reason. Why? Because if you can't make the business case and prove a time and money savings, you will remain unconvinced and unaware of the benefits.

There is truth in the statement, "We do not have sufficient IT or operational skills." According to a PIA study done a few years ago, there is a serious problem with skills and staffing today. They reported that 18% of respondents reported trouble hiring staff with the right IT/MIS skills and 8% reported difficulty hiring staff with web and mobile skills. 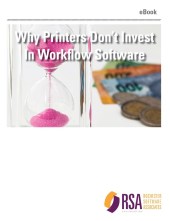 Get the Series eBook Now

Don’t want to wait for the rest of the series? Download the "Why Printers Don’t Invest in Workflow Software" eBook today.

Howie on the Workflow Research

Our interpretation is that there are two possible reasons most companies do not invest: cost justification and staff skills. However, suggesting that companies are reluctant to invest because of a lack of staff skills is hard to believe. If that were true, companies would not invest in anything because any workflow, printing, or finishing investment requires new skills.

Based on conversations we have with clients, we realize that not everyone understands how to build the business case. The business case usually includes a minimum of two things: the cost benefit analysis and a return on investment (ROI) calculation.

Every step of the process which is eliminated or performed faster has an associated savings. This savings can include both a savings in equipment time and staff time. If the new process is more reliable (one less job that requires reprinting/month), the entire savings of that rework (not just materials, but time too) is a savings, as well. Check out this video about cost benefit analysis and this ROI video. RSA also offers ROI calculators for Web to print and VDP.

If you need help understanding the benefits of workflow automation or cost justifying the investment, contact me or RSA.

Next month, my final post in the series will discuss the real root cause of why printers are not investing in workflow automation- and how to overcome it. The reason for the lack of workflow software investment just might surprise you.

Manual Print Metrics- The Worst Data Problem in the Industry

The Evolution in Printing Metrics